Open Letter to the Protesters

Congratulations, you made history! And you won an early battle. You made history because there hasn’t been a mass protest like yours in recent Sri Lankan history. It is also historical because your protest is not organized by a political party, a charismatic leader or an identified entity, although, as you know by now, many parties, individuals and wizards behind virtual curtains are claiming at least the partial, if not entire, ownership of it. As the saying goes, success has many fathers and failure is an orphan. If, heaven forbid, this ended bloody you will see how fast they will distance from you and become sages. 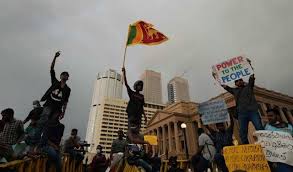 “But, you see it is a bit premature to take a victory lap as you are far from the finish line. Remember, what you have won is a battle not the war. It is far from over and your continuous occupation of the streets and the public sphere show it.”

Do you know where you are heading?

But, you see it is a bit premature to take a victory lap as you are far from the finish line. Remember, what you have won is a battle not the war. It is far from over and your continuous occupation of the streets and the public sphere show it. So what is next or what’s the game plan? Do you know where you are heading? Yes, we know that you want Gota to go home, preferably to people’s rent-free home (yes, yes, I know that you want all 225 to go and you want all of them to return the loot as well, but let’s stick to the main point for the time being). Just assume that Gota finally listened to you and went home (and putting icing to the cake took the 225 with him). Then what? In search for answers let’s take a little deeper and broader look.

At the pinnacle of the protest who is going to come on a white horse and save it all? We hear you saying that you are sick and tired of politicians and you want leaders from outside the realm of politics to fix things. Well, didn’t 6.9-millions of you say exactly that going to the polls at the last Presidential election? And didn’t very Gota you want to send home ran on the platform that he is not a politician? What did that “outsider” end up doing? He made history too, right? By sending the country to bankruptcy, keeping it dark and idling that brought you all to the streets! What’s the moral of that tale? You should take stock as you are pretty much asking for a repeat.

“So be a bit cautious of what would become the day after. That is, who would fill the void the day after Gota and Co., went home.”

You see, governing is so different, difficult and challenging than talking and running anything, including running a winning Army. As a matter of fact, you are not alone thinking that it is time to get non-politicians to govern. Since politicians across the board have become so corrupt, people all over the world got sick and tired of them and started electing a new breed of “non-politicians” to political offices. They came from military, corporate world, sports, arts etc. How did they do, by the way? Allow me to drop some names and let you be the judge: Lieutenant Colonel Gotabaya Rajapaksa of Sri Lanka; Cricketer Imran Khan of Pakistan; Investment Banker Emmanuel Macron of France (remember the yellow-vest protest?); self-proclaimed “very-successful, I am a genius” billionaire businessman Donald Trump of the United States. The list goes on but you get the point. So be a bit cautious of what would become the day after. That is, who would fill the void the day after Gota and Co., went home.

Let’s look a bit further down to see how these modern-day protests ended, what they gained and lessons they could teach us. We can go to Tunisia where it all started some 11 years ago when a 26-year-old street vendor, Mohamed Bouazizi, self-immolated and set off a wave of protest for democracy and good governance (aka, corrupt free). Actually, Tunisia was the most important success story of the Arab Spring of 2011 until it wasn’t. Everything Tunisia achieved is now in jeopardy as the increasingly authoritarian president, Kais Saied, seems to be following dictators’ handbooks. By the way, Saied is a constitutional law scholar and not your run-of-the-mill politician. (Tunisia, just like Sri Lanka, is also on the verge of economic disaster.) And how about Egypt where the 18-day protest brought a military strong-man Hosni Mubarak to his knees and ended up in jail as Arab Spring unfurled? Well, Mubarak died as a “free man” and the protest-minted, once democratically elected, Muslim Brotherhood leader Morsi ended up in jail and brought military dictatorship back to Egypt under General Sisi. Between Mubarak’s ousted and Sisi’s ascend to presidency tens of thousands came to Tahir Square, constitutions re-written, more than thousand died (Tahir Square massacre) and thousands are still jailed. Allow me to bring one more outcome of a protest-made government experience that goes little deeper than the Arab Spring: Marcoses of Philippines. The public protest sent Marcoses, who looted as much as $10 billion, fleeing to Hawaii in 1986. The family returned in 1989 and started orchestrating a political comeback – a quite successful one. Marcos Junior, widely known by his childhood nickname Bongbong, is seen as the front-runner in the May 9 election (don’t get any ideas, Namal) although he is under litigation for stealing billions of dollars and an unpaid $3.9 billion in estate taxes.

I  am just suggesting that you should take a look at the past and learn from the mistakes that were made. Sure, you are writing the Sri Lankan history but not the world history.

So the track record of what mass protests could eventually bring is not a very promising one. This of course doesn’t mean that I am not in favor of the protest nor do I argue in favor of continuation of Rajapaksa regime. They have failed miserably, ruined the country and you have every right to call their outset. I am just suggesting that you should take a look at the past and learn from the mistakes that were made. Sure, you are writing the Sri Lankan history but not the world history. What is happening in Sri Lanka, as far as the protest is concerned, is unprecedented. But when it comes to world history what’s going on in Sri Lanka is not new. The world has seen this movie before. Almost all the failures I have cited, and not cited, were results of replacing one incompetent set of rulers with another incompetent set of rulers with different color, shape and maybe, ideology. And, unfortunately, in many instances things got worse. It shouldn’t be that way though. We can learn from the mistakes others made. Quest for clean, uncorrupt leaders is an arduous one often with abysmal results. Most people who claim that they are clean and not corrupted didn’t have power to become corrupt to begin with. And when protests like yours bring those “clean” people and bestowed them with power they are very likely to become corrupt than not. As the saying goes, power corrupts and absolute power corrupts absolutely. Fortunately, there is a way. When changes resulted in establishing democratic institutions that has the power to check on politicians it becomes harder and harder for the corrupt to exploit those and fatten themselves. So my suggestion is, yes, send Gota, and the rest home, and fill the void with democratic and fair institutions rather than self-proclaimed “clean” people who not yet had a key to the pot. A good place to start with is, of course, the Constitution where the current one gave the man you want to send home the absolute power and put him above the law (remember, “I am the Law?”).

“The PM legitimized your protest with his invitation and you kicked that into trash. The world is watching and what they saw did not score you any points. Instead it saw your naivete.”

Finally, let me end by brining your attention to Realpolitik. A few days ago you won another minor battle when the Prime Minister invited you to talk and you refused. Why? Why not go there and put what you want on the table? Do you understand how costly the mistake you made? Just look at the missed optics? The PM legitimized your protest with his invitation and you kicked that into trash. The world is watching and what they saw did not score you any points. Instead it saw your naivete. I think one reason you didn’t accept the offer must have been that there is no one, or a group, to represent you (i.e., the Protest). Find that representation. Find common ground and start negotiating. Life is a compromise and history’s wastebasket is full of uncompromised principles. You have been brave and it is time to be wise .