Former Pradeshiya Sabha member Premathilaka Amaraweera has died in police custody. The suspect who 62-year-old was arrested by the Hungama Police yesterday (December 18) on a charge of selling liquor on Poya Day.

The CCTV footage was released to the media yesterday afternoon on how he fallen to the ground.

Relatives of the deceased MP have also staged a protest inside the hospital premises claiming that the death was suspicious. Later, the protesters blocked the Colombo-Kataragama main road in the Ranna area. 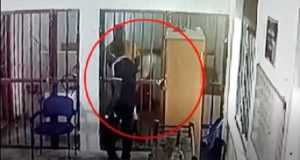